Cat got your tongue? 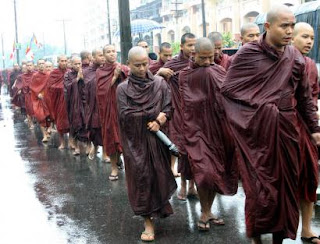 Time magazine describes the reasons that India is so silent on the saffron revolution that is threatening the power of the dictators. Here are the geo-political reasons why.

Delhi's strategy is threefold. Its initial overtures to Burma's military leaders came as India faced a growing insurgency in its northeast. Many of the rebel groups in that region are based and train across the border in Burma. As India has grown friendlier with Burma's generals the two countries have worked together — with some limited success — on eradicating the northeastern insurgents.

Like China, power-hungry India is also keen on exploiting Burma's huge oil and gas resources. This month it signed a production deal for three deep-water exploration blocks off the Rakhine coast. It is also searching for gas in two other blocks. Access to Burma's resources will help boost India's power supplies but it is important for geopolitical reasons as well. The new production deal comes only months after Beijing beat Delhi on securing a deal to build a pipeline through to Burma's gas fields. The race for resources has helped make Burma the frontline in a larger struggle for influence in Southeast Asia. The threat of unfettered Chinese influence in Burma is one of Delhi's main ripostes when western allies question India's ties with Rangoon.

Will such a stance hurt India's democratic credentials? India's former Defense Minister George Fernandez, a longtime supporter of Burmese democracy activists, thinks so, calling such quiet diplomacy "disgusting." "This government is not concerned with what is happening in its own neighborhood," he says. In one of the few Indian newspaper opinion pieces to question India's stance Karan Thapar asked in the Hindustan Times last week whether a "Cat got our tongue?" "Indian democracy has shrunk because of its unwillingness to speak out," he wrote.Modern Love section in the NYT has a funny story about a family that a woman thought she was part off, but then wasn't.

NOW, I wished that my East Coast parents would adopt some aspects of my Western parents’ infuriating impartiality: search for balance, look at it from my point of view. I felt like a squalling sibling, tugging on their sleeves, crying: “Not just my fault! Not just my fault!”

When a friendship ends, you start to measure time by what your friend has missed. In the two years that have passed, I broke up with some boyfriends, I was mugged at knife point, my sister married. I wrote one unpublished book review, then another.

Through all of the changes that a couple of years bring, both monumental and ridiculous, I missed my friend. I missed her sarcasm, her insight. Her mother. Her father. Oh, how they would have worried about me. How they would have laughed at my stories. How they would have understood my frustrations, fed me potatoes and tortes to assuage my boy-grief, expressed indignation at the rejection slips that kept piling up next to my computer.

I thought about sending them a card: “Have you sat shiva for me yet?”

It was too much; I never wrote. In the end, I realized that I adored my friend’s parents for the exact reason that I would not hear from them: because they loved their daughter so fiercely, so actively, so unswervingly. Theirs was a glaring and glorious spotlight of love with a sharp, defined edge.

And I had stepped out.

Unknown said…
In an article in the NY Times, "What makes a monk mad", it appears that the religious establishment is not one cohesive unit when it comes to their stand on human rights issues of the common people in Myanmar. Many of the monks seen protesting on the streets were the young ones from the lowest orders, some of whom may have taken up monastic life for a short period and still have close ties with their family and friends. But the monks in the higher orders - those who wield the real spiritual power - seem to be funded by the military junta. In that case it becomes difficult to have any serious leverage with the military.

If this is the situation, how can the military derive spiritual legitimacy from the monks at the same time? Or is it all a wink-wink, hush-hush relationship between the top level monks and the junta?
01 October, 2007

amba said…
Hi Amrita, thanks for your comments, you raise interesting questions about the link between the monks and the junta? I doubt that the lower level monks started the protests. It had to have come from above for so many monks to participate.
02 October, 2007

Unknown said…
I came across a BBC article that seems to explain a little more clearly the role of the monks in this uprising.

"Burmese monks not only play a spiritual role, but also have a history of political activism. They have been at the forefront of protest against unpopular authorities, from British colonial power in the 1930s to the last pro-democracy campaign in 1988.

... only about 10% of Burma's monks are politicised, and many of the monasteries may be unaware of the scale of the agitation currently under way in the country.

If fully mobilised, however, the monks would pose a major challenge to the military, and their moral position in society could embolden many more people to join the protests."

An interesting commentary was made by George Packer in the New Yorker where he quoted passages by political theorist Hannah Arendt:
"In a contest of violence against violence the superiority of the government has always been absolute; but this superiority lasts only as long as the power structure of the government is intact—that is, as long as commands are obeyed and the army or police forces are prepared to use their weapons."
Why hasn't the army collapsed in Burma? Why haven't the soldiers defected in large numbers?

"When the monks carried their alms bowls upside down in the soldiers’ faces, they were withdrawing the legitimatizing sanction of Buddhism from the state. Perhaps it seemed to some of those young soldiers that they were doomed, in that moment, to endless reincarnation. Despite a few reports of mutinous acts, however, the chain of command has held. Ordered to shoot, Burmese soldiers shoot, and even—this is common when security forces turn on their own people—descend to acts of shocking brutality. One would need a deep knowledge of Burmese society and its military to understand exactly why these soldiers are willing to become criminals. But. until that changes, no U.N. special envoy or expressions of American and European outrage, Southeast Asian disapproval, or mild Chinese concern will matter."
03 October, 2007

Popular posts from this blog

My Mother's Sari by Vaidehi

June 12, 2006
While browsing through Labyrinth books the other day, I came across Sultana’s Dream A Feminist Utopia and selections from the secluded ones by Rokeya Sakhawat Hossain (1880-1932), edited and translated by Roushan Jahan, afterword by Hanna Papanek.

The book looks at purdah-the seclusion and segregation of women from three women’s perspectives. The first an early twentieth century Muslim writer Rokeya Sakhawat Hossain, the second by a modern Bangladeshi literary scholar and feminist activist and third by a modern North American feminist social scientist familiar with South Asia and the purdah, she provides a global contextual analysis.

Sultana’s dream was written by the author to impress her husband with her newly learnt ability in English, “to pass the time, I wrote the story” she mentions. The book is a utopian work with a lot of cleaver satire. The book ridicules Indian stereotypes and customs.

In Ladyland men are part of society but shorn of power. They live in seclusion and look afte…
1 comment
Read more