Half Of A Yellow Sun by Chimamanda Ngozi Adichie 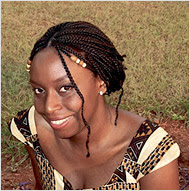 Just finished reading a very powerful book on the struggle for Biafra. The title referred to the national flag of Biafra The novelist weaves the story of families and relationships, loyalties and fears while dealing with the larger issues of war, hunger, poverty, violence and death.

The dialogue between Aunty Ifeka and Olanna was the turning point in the novel for Olanna.

.."I know now that nothing he does will make my life change. My life will only change if I want it to change."

"What are you saying Aunty?"

"He is very careful now, since he realized that I am no longer afraid"...."You must never behave as if your life belongs to a man. Do you hear me?" Aunty Ifeka said.

"Your life belongs to you and you alone, soso gi.."

ARE we ready for a novel about an imploding nation riven by religious strife and bloody wrangling over who controls the military, the civil service, the oil; a novel about looting, roadside bombs, killings and reprisal killings, set against a backdrop of meddling foreign powers? A novel in which several once-colonized peoples chafe against the nonsensical national boundaries that bind them together, in which citizens abandoned on the highways of fear must choose between a volatile federation and destabilizing partition?

Chimamanda Ngozi Adichie’s second novel takes place not in the deserts of contemporary Iraq but in the forests of southeastern Nigeria — 40 years ago. If, at independence in 1960, Nigeria was “a collection of fragments held in a fragile clasp,” in 1967 that clasp snapped, unleashing the three-year Biafran War that saw Muslim-dominated forces from the north laying siege to the Christian Igbo of the south, who sought to secede from Nigeria after the widespread massacre of their people.

At once historical and eerily current, “Half of a Yellow Sun” honors the memory of a war largely forgotten outside Nigeria, except as a synonym for famine. But although she uses history to gain leverage on the present, Adichie is a storyteller, not a crusader.

The novel centers on twin sisters, Olanna and Kainene, members of the Igbo elite. Physically and temperamentally dissimilar, they struggle with an on-again-off-again mutual loyalty crosshatched with mistrust and betrayal. The twins also gravitate toward very different men: Olanna becomes the mistress of Odenigbo, an expansive intellectual and Pan-Africanist who teaches at a provincial university, while Kainene falls for Richard, a bashful, awkward but principled Englishman who takes up the Biafran cause. Rumors of war, then all-out conflict throw this privileged foursome’s world into disarray — along with the very different world of Ugwu, Odenigbo’s houseboy, who comes from an impoverished rural village.

At times Adichie’s writing is too straightforward, the novel’s pace too slack. But whenever she touches on her favorite themes — loyalty and betrayal — her prose thrums with life. Like Nadine Gordimer, she likes to position her characters at crossroads where public and private allegiances threaten to collide. Both “Half of a Yellow Sun” and Adichie’s first novel, “Purple Hibiscus” (which won a Commonwealth Writers’ Prize), explore the gap between the public performances of male heroes and their private irresponsibilities. And both novels shrewdly observe the women — the wives, the daughters — left dangling over that chasm.

When does loyalty flow from love, and when from shared adversity or heritage? “Half of a Yellow Sun” explores these questions through the twins’ uneasy relationship. Like Nigeria’s postcolonial peoples, their lives are involuntarily joined; both they and their nation must choose between a fractious unity and a fraught secession.

The Biafran War has exercised a powerful hold over Nigeria’s literary imagination, animating almost every notable Nigerian writer from Chinua Achebe, Wole Soyinka and Christopher Okigbo to Flora Nwapa, Buchi Emecheta and Ken Saro-Wiwa. Adichie, who was born after the war, belongs to a new generation of talented young Nigerian writers: Helon Habila, Uzondinma Iweala, Helen Oyeyemi and Chris Abani (whose “Graceland,” about a shantytown Elvis impersonator, is one of the most astonishing metropolitan novels of our time).

Adichie may not have lived through the civil war, but her imagination seems to have been profoundly molded by it: some of her own Igbo family survived Biafra; others did not. Like the young American writer Tom Bissell, for whom the Vietnam War has become a shaping passion via his ravaged veteran father, Adichie approaches her country’s past violence with a blend of generational distance and familial obsession.

This tug of detachment and intimacy gives “Half of a Yellow Sun” an empathetic tone that never succumbs to the simplifying impulses, heroic or demonic, of advocacy literature. Even the most honorable of her characters have humanizing flaws. Adichie understands that novels, above all war novels, cannot easily survive a rush to judgment. And so she takes us into the minds of both a gang-raped bar girl and the once-tender teenage soldier who eventually becomes her assailant. Reaching deep, she finds a “hard clot of fear inside him” at “the casual cruelty of this new world,” a cruelty in which he becomes incrementally complicit.

“Half of a Yellow Sun” speaks through history to our war-racked age not through abstract analogy but through the energy of vibrant, sometimes horrifying detail. A refugee flees the north by train, carrying in a bowl her daughter’s head, still bearing its delicate braids. Famished children in refugee camps find themselves unable to outpace and catch lizards. A child soldier, nicknamed Target Destroyer, uses “words like enemy fire and Attack HQ with a casual coldness, as if to make up for his crying.” A girl’s belly starts to swell, and her mother wonders: is she pregnant or suffering from malnutrition?

The poet Czeslaw Milosz, on fleeing Poland for the United States, was bemused by Americans’ assumption that their future would more or less resemble their present and their past. If you’re from Poland or Nigeria — or Lebanon, Guatemala, Afghanistan, Colombia or Vietnam (or arguably from most societies on earth) — the assumption of continuity can seem improbable to the point of madness.

“Half of a Yellow Sun” takes us inside ordinary lives laid waste by the all too ordinary unraveling of nation states. When an acquaintance of Olanna’s turns up at a refugee camp, she notices that “he was thinner and lankier than she remembered and looked as though he would break in two if he sat down abruptly.” It’s a measure of Adichie’s mastery of small things — and of the mess the world is in — that we see that man arrive, in country after country, again and again and again.

Popular posts from this blog

My Mother's Sari by Vaidehi

June 12, 2006
While browsing through Labyrinth books the other day, I came across Sultana’s Dream A Feminist Utopia and selections from the secluded ones by Rokeya Sakhawat Hossain (1880-1932), edited and translated by Roushan Jahan, afterword by Hanna Papanek.

The book looks at purdah-the seclusion and segregation of women from three women’s perspectives. The first an early twentieth century Muslim writer Rokeya Sakhawat Hossain, the second by a modern Bangladeshi literary scholar and feminist activist and third by a modern North American feminist social scientist familiar with South Asia and the purdah, she provides a global contextual analysis.

Sultana’s dream was written by the author to impress her husband with her newly learnt ability in English, “to pass the time, I wrote the story” she mentions. The book is a utopian work with a lot of cleaver satire. The book ridicules Indian stereotypes and customs.

In Ladyland men are part of society but shorn of power. They live in seclusion and look afte…
1 comment
Read more